Sharing recipes is key to expanding your repertoire of cooking abilities. Five years ago I received a recipe that has become a staple in my kitchen. The recipe came from my best friend who got it from her mom who received it from her coworker and who knows where before that. The original recipe is for Cinnamon Chip Scones but once you know the basic recipe you can modify it to make different flavors. I’ve tried apple walnut, pear, dried cherries with white chocolate chips and butterscotch and another new variety this past weekend. Cinnamon Chip are still my favorite but it’s always fun to experiment. Its a recipe you know will satisfy and a popular recipe to share. I know I can say I’ve shared it with at least 10 people if not more!

This past weekend I attempted yet another flavor twist for a Pampered Chef party. Since the people attending were all interested in cooking I knew they would be adventurous so I went with one batch of traditional Cinnamon Chip Scones and a batch of Coconut Banana Chocolate Chip scones. 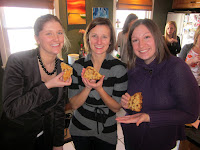