First, let me address the white elephant in the room. Where have I been? Or better yet, where have the blog posts gone? Well, having three kids in 3.5 years has really taken away from extracurricular activities. Have I stopped cooking? No. Is nutrition or healthy eating less important? No. Actually, my husband and I are more healthy now after I had him read The Blue Zones by Dan Buettner (more on that in a future blog). Most importantly I’ve thought of my blog constantly when I am making recipes worth sharing. That’s why I’m back. I have a list of recipes I’m dying to share but after shopping for them, cooking them, cleaning it up and putting the kids to bed I find myself exhausted and in bed.  That’s about to change. My growler of cold press coffee and school start for the girls have me ready to post!

First, before corn season is over I want to share a delicious end of summer recipe that you HAVE TO TRY. It would pair perfect with grilled food, fish or even as a side to a Mexican food night. My mom found this delicious recipe in the Milwaukee Journal Sentinel this month (adapted from food52.com). It has citrus, crunch, cheese and spice and doesn’t take long to make. YUM YUM YUM!

Since I seem to be craving carbohydrates a lot during this pregnancy I decided to feature healthy ways to satisfy those cravings today on Twin Cities Live. Not only will you fill up on carbs, they will be the healthy kind and you will also get some servings of fruits and vegetables in with these three dishes. So, indulge away with this edamame garden salad, couscous salad with dried fruit or delicious whole wheat raspberry bar.  I make the edamame salad a lot and can tell you it’s delicious. The couscous salad was a new recipe for me but I taste tested it last night. I really liked the spices they added to the couscous, it has a middle eastern taste with a sweet finish from the dried fruit. I am yet to try to raspberry bars but the smell has been taking over my house and I can’t wait to try one. I can only imagine how tasty they are! To find out what other pregnant woment think of the foods watch Twin Cities Live today on Channel 5 at 3pm.

Here are the original recipes with my modifications in red. Serves 12. Nutritional Information (I calculated the calories/fat from sparkpeople.com) : Fall is upon us which means colder weather, falling leaves and for many back to the routine cold weather fruits. Nearly half of the fruit Americans eat are from oranges, bananas, apples and watermelon alone. While I love all four of those I also find myself searching for more variety and trying to avoid the dreaded fruit fatigue. Whether your 20, 30, 80 or a small child, we can all benefit from fruit so don’t let your intake go down this winter because of boredom! Only one in five Americans currently reaches their recommended intake of fruit each day (1-2 cups). One easy way to increase your intake is to try new fruit and recipes and fight off fruit fatigue. That’s why November’s food of the month is tart cherries.

Cherries are known as a super fruit for their powerful antioxidant properties that help reduce inflammation and in turn may help decrease the risk of cardiovascular disease or decrease the symptoms of arthritis. They are also a great source of potassium and recent research shows they may relieve muscle pain for active adults.

It’s no surprise that eighty-seven percent of Americans put taste as their number one consideration when purchasing food. Cherries sweet, tart and juicy flavor will keep you coming back for more. Another plus for cherries are the many forms available year round (fresh, frozen or dried) making it easy to add them to your daily intake. They’re also a great fruit for the holiday season; their bold red color can brighten any dish and add flavor to meats, stuffings, sides and desserts.

To start out this month I made a new cherry smoothie recipe from Choose Cherries. I really enjoyed the hint of cinnamon mixed with the sweet honey and tart cherries.

Blend all ingredients in blender until smooth. Pour into two chilled glasses
Another one of my favorite ways to eat cherries is in a pork dish my mother in law makes. If you like savory with a touch of sweet I highly recommend trying this recipe.

1. Rinse the pork loin, pat dry, and place in a shallow glass or ceramic baking dish.  Set aside.
2. Whisk together the cherries, wine, vinegar, cranberry juice, shallots, and rosemary in a bowl.  Pour this mixture over the pork, cover, and refrigerate 2 to 3 hours or overnight, turning the pork several times.
3. Heat the olive oil in a large, ovenproof skillet over medium heat.  Remove the pork from the marinade (reserve the marinade) and place the pork in the heated skillet.  Cook the pork on all sides, 5 to 6 minutes total time, until light brown.   (I browned in my electric skillet then transferred to a baking dish).
4. Pour the reserved marinade over the pork and place the skillet (or baking dish) in the oven.  Roast, basting several times, 20 to 25 minutes or until a meat thermometer registers 150 to 155 degrees.  The meat will be a very light pink color.  (NOTE:  The pork will continue cooking after it is removed from the oven).
5. Remove the pork from the baking dish and place on a grooved carving board.  Cover the pork loosely and let it rest 5 to 10 minutes before carving.
6. Season with salt and pepper.  Slice into ¼-inch pieces and spoon the pan juices over the pork.  Serve immediately. 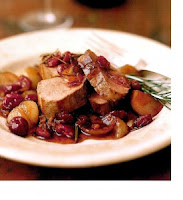 What this Box Contained

New Recipes & Meals I Made 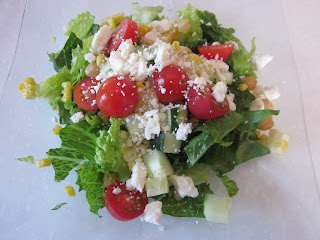 Swiss cheese, tomato, pepper, spinach and zucchini omelettes with a side of tomatoes with basil and cooked zucchini. 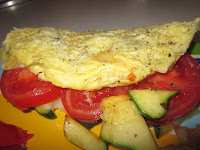 These are my favorite fish tacos. I got the idea of making a jicama cole slaw for the top of fish tacos from a restaurant in town called Chino Latinos. The roasted red pepper sauce is also a great touch. You can also add shredded lettuce or cheese to the tacos but we ate them with just the fish, jicama slaw and sauce. I’m disappointed at how they look in this picture because they taste much better than that! Also, I added cherry tomatoes to the slaw this time since I wanted to use them up.
Ratings: Sina: 4, Ryan: 4 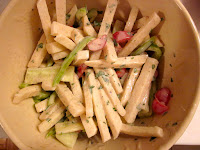 Breakfast sandwiches with arugula, tomato, pecorino cheese and an egg on an English muffin. 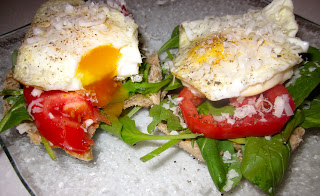 The original recipe is from Smitten kitchen and posted on my holiday blog from last year when we made it the correct way (with sweet potatoes). Since I had swiss chard in the garden and extra garlic and scallions I figured I’d make it with my crop share potatoes from the last box and this box
Ratings: Sina: 4 (delicious but not as good as when you make it with sweet potatoes) 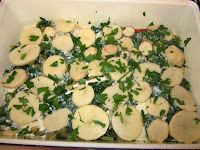 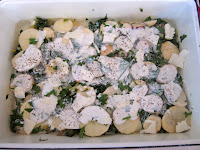 This is the second year my husband and I have joined a crop share with our neighbors. We have a full share every other week package and our first box came last week. As a new addition to the blog I plan to share my journey cooking through all the unique vegetables that the boxes contain. I’ll share what was in the box, new recipes I try with the vegetables and other information about the vegetables. To give you guys a better understanding of how the recipes tasted my husband I will also rank the taste of recipes. That way you can distinguish which may be worth trying. Our rating scale will be out of 5 stars.
After the cold and wet spring I wasn’t sure what I would find in my first box. With much anticipation my neighbor Greta and I went together to find our pick up location and vegetables. After splitting things with Greta here is what our share looked like.

What this box contained

New recipes I made from items in this box 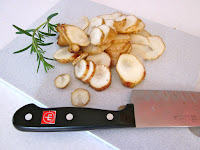 -Baby Red Potatoes, boiled then cut into 1/2 inch pieces (I used ~5 pounds)
-Chives, diced (~1/2 cup or to taste)
-Light Sour Cream (~1 cup)
-Salt and Pepper to taste (don’t be bashful)
Rating: Sina: 3 stars,  Ryan  2 stars
I love potato salads with a sour cream base but I think I would add garlic and more pepper next time.

Pasta with Ramps and Sorrel 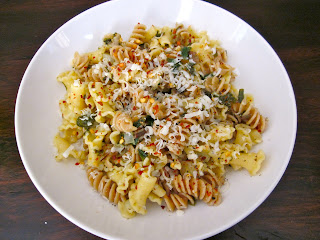 Barley, quinoa and bulgar salads are my absolute favorite sides for dinner when it’s nice out. They are great sources of fiber and easy to prepare ahead of time. I like to make them on the weekends for dinner and use the leftovers for our lunches during the week. The nice thing about whole grain salads is you don’t need a recipe to make a delicious combination and it’s a great way to use up vegetables that have been sitting in the fridge for awhile. Start by preparing the grain of your choice per the box directions: barley, wheatberries, quinoa, bulgar, etc…(I usually cook mine in broth instead of water for added flavor). Next, dice up fresh vegetables and herbs (peppers, green onions, tomatoes, cucumbers, sun dried tomatoes, olives, zucchini, arugula, basil, parsley, thyme, etc…) and add them to your cooled off grains. You can also add beans, nuts, cheese (feta works great) or seeds. Lastly, top this off with dressing. You can use a store bought dressing if you are crunched for time but homemade dressings are healthier and tastier and very easy to make. Start by using a general ratio of about 2:1 for oil to vinegar or a citrus juice like lime, lemon or orange. Then add some fresh or dried herbs or just a sprinkle of salt and pepper.

Here’s the recipe I tried this weekend (minus the pistachios):

Mediterranean Barley with Chickpeas and Arugula

My family is filled with people who love to cook and when we go home we’re always treated to great food. My Aunt Nancy knows how to cook everything, from traditional Italian food (my dad’s family is 100% Italian) to wholesome vegetable dishes from her garden. Then we have my mom and I who both love great food and new recipes. We’re also graced with my brother’s fiancee, Sara, a culinary school grad and professional pastry cook. After much deliberation, we decided to split cooking honors on Christmas Eve and Christmas Day.

Today, Christmas Eve, Sara undertook the pivotal task of making a traditional four course Italian meal. Assisting is my dad, an eager culinary pupil, and my brother who has turned into our resident sous chef. Below they are seen creating the Butternut and acorn squash ravioli.

My dad’s favorite meals consist of many courses, conversation, and wine. My two cousins, Maddi and Emily, are vegetarians so we have both meat and veggie dishes tonight.

My mom, Aunt Nancy, Maddi and I will have our turn in the kitchen tomorrow, Christmas Day. In order to spend Christmas with friends and family we brined the turkey and prepped our dishes today. Here is our list of sides: 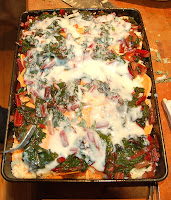 MMmmm…I can’t wait to eat. May your holiday be filled with family and finger-lickin’, lip-smackin’, melt in your mouth food just like mine. Buon Natale from the Postorino/Teskey/Reeves family. 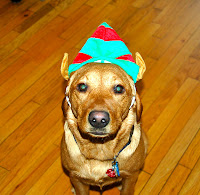